Fluoxymesterone substance is precursor of methyltestosterone. Through its changes in the chemical structure, was made much more androgenic than testosterone. The anabolic component is only slightly pronounced. Based on its characteristics halotestin is used mainly when the athlete is more interested in a strength build up rather than in a muscle gain. Powerlifters and weightlifters who must stay within a certain weight class often use this drug because they are primarily interested in a strength gain without adding body weight. In bodybuilding halotestin is almost exclusively taken during preparation for a competition. Since its substance is strongly androgenic while at the same time aromatizing very poorly, this substance helps the athlete obtain an elevated androgen level while keeping the estrogen concentration low.

11b-hydroxy and 9-a-fluoro groups, for oral administration.
As a result there is a powerful pill steroid with strong androgenic properties and the lack of flavor and unlike testosterone, with moderate anabolic effects. This tells us that this drug is not designed for building muscle mass. For it can be safely used by those athletes who need power, lots of power. 20 times more active than methyltestosterone, which proved relevant studies, differs from methyltestosterone the addition of fluoro group in the 9 position is alpha and the addition of the hydroxyl group in position 11-beta, that allows you to block the aromatization. These two modifications improve androgenetic seriously, and increase the relative biological activity of 17-methyltestosterone so it passes through the liver, which makes it very toxic.
Fluoxymesterone
Admission (for men):
Athletes it is used in a dose from 5mg to 40mg a day for 2-4-6 weeks.
Because of their specific characteristics are popular in many sports: martial arts, track and field, hockey, power sports, etc.
Debatable use in bodybuilding, because there are more safe products.
Fad weight it can be combined with testosterone and its esters and nandrolone.

Halotestin is taken in mild doses (10-20 mg) every day for short periods of time, 4 weeks, 6 weeks at the very most due to its high level of toxicity. The use of anti-estrogens is not necessary since fluoxymesterone does not aromatize at all. As secondary drugs one may want to consider blood pressure medication such as catepressan to avoid hypertensive conditions. What you will definitely need is a check of liver values on a regular basis if you want to play it safe. I don’t normally recommend the use of liver-protectors during a cycle as enhances liver function breaks down a greater amount of your steroid, but in this case you ought to make an exception. Milk thistle, dessicated liver, vitamin B6 and such both during and after a cycle are highly advised. There is no need for clomid of Nolvadex use after a cycle to bring back natural test.

The possible side effects of Halotestin (Fluoxymesterone) are mild. Some consumers may find that with the body’s internal rise in testosterone, they might notice some skin blemishes or acne. It is claimed that the blemishes or acne will disappear after discontinuing use of the supplement.

This product is claimed to be hepatoxic (a compound which increases liver values). High liver values are a sign that the liver is under a lot of stress as it filters ingested substance out of the body. 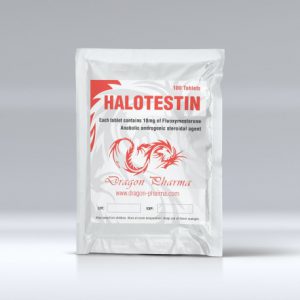